Aggressively Protecting Clients in the New Jersey Courts for More than 30 Years. 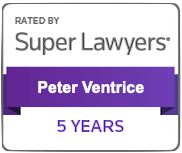 Attorney Peter Ventrice is a partner at the firm, and has been practicing since 1991.

Mr. Ventrice earned a Preeminent “AV” Peer Rating from Martindale-Hubbell, which is the highest possible rating in both legal ability and ethical standards based upon a peer review rating process.

He has been selected as a New Jersey “Super Lawyer” in the area of family law from 2015-2022 and in 2012, a distinction held by fewer than 5% of practicing attorneys in the State of New Jersey, and is based upon peer recognition and professional achievement.

Mr. Ventrice is a Qualified Mediator, he has been appointed to serve as a Middlesex County Matrimonial Early Settlement Panelist, and he is admitted to the roster of Mediators for Economic Aspects of Family Law Cases by the New Jersey Courts under Rule 1:40.

He has also been appointed to serve on the Middlesex County Assignment Judge’s Family Lawyers Committee.

Mr. Ventrice graduated with a Bachelor of Science from Lehigh University in 1987, and received a Juris Doctor from New York Law School in 1990.

Mr. Ventrice's family law practice includes divorce, child custody and parenting time, child support, alimony, distribution of assets and liabilities, enforcement and modification of existing judgments and orders, and domestic violence restraining orders.  He is also a qualified divorce mediator.  Mr. Ventrice understands and appreciates that every family law case is of the utmost of importance to each of his clients and his clients' families.

His practice also includes civil litigation in both State and Federal Court involving personal injuries, and workers' compensation.  Mr. Ventrice also has an extensive appellate practice in various areas of the law, and he has argued appeals before the New Jersey Supreme Court, the Appellate Division of the Superior Court of New Jersey, and the United States Court of Appeals for the Third Circuit.

Mr. Ventrice is also devoted to public service.  He has been recognized by Women Aware, Inc., for service to victims of domestic violence.  He serves as a Councilman in the Borough of Lake Como, and he previously served the City of New Brunswick as Public Defender and on the Zoning Board.

He has also lectured on domestic violence, appellate advocacy, and civil rights litigation.

United States Court of Appeals for the Third Circuit Bar
Member Since: 2017